For 1970, the Ford Mustang was yet again restyled; this time it was to tone down the “aggressiveness” that caused they sales to plummet in 1969. In doing so, they went back to single headlamps and simplified some other exterior design elements. Even though Ford restyled the 1970 Ford Mustang to be less aggressive and help boost sales, they sold less units than the previous 1969 Ford Mustang.

* Poly. is another way of saying Metallic, ** Shelby Mustang Carry Over Color 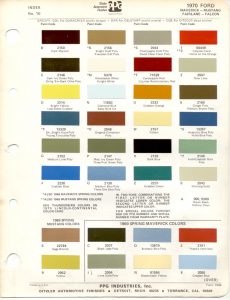 * PPG and Ditzler are registered trademarks of PPG Industries, Pittsburg PA. We do not offer, or make, or are affiliated in any way with PPG products.

Looking For Something With A Little More Pop?